A ban on television advertising to children in Quebec, Canada, has been linked to a reduction in spending on fast food

In Chile, restrictions on marketing to children apply to products exceeding thresholds for added sugars, sodium, saturated fat and calories

It is clear that food marketing promotes unhealthy foods and has a negative impact on children’s health.1 A systematic review found evidence that statutory regulation could reduce children’s exposure to television advertising of foods high in fat, sugar and salt, as well as purchasing of these foods. Included as part of the review was real-world evidence from jurisdictions where statutory regulation on television advertising has been introduced, including Canada’s Quebec province, where advertising cannot be targeted to children under 13.2 Quebec’s 1980 law banning all advertising to children in print and electronic media was the first of its kind and has been linked to a reduction in spending on fast food.2 Other countries to have introduced statutory bans on advertising to children in some media include the United Kingdom, Sweden, South Korea, Taiwan, Chile and Mexico.

While the evidence on regulation of food marketing is largely focused on television advertising, the evidence from tobacco is that comprehensive marketing restrictions are needed to reduce consumption. Partial restrictions that apply only to some media will simply shift marketing to unregulated media. Researchers have called for rigorous monitoring of statutory regulation to limit unhealthy food marketing to children; and stressed the importance of recognising that improvements in children’s health are likely to be gained over the long term and may be cumulative.3

A coalition of 35 leading community, public health, medical and academic groups recommends regulation by the Australian Government to reduce the volume and influence of unhealthy food marketing to children, as part of a comprehensive approach to reducing overweight and obesity.4 An effective regulatory scheme should:5

While a comprehensive and consistent national scheme to reduce unhealthy food marketing to children would require federal regulation, states and territories have the opportunity to restrict marketing in settings they control or manage. These include buses, trains and public transport infrastructure, schools, sporting facilities, and billboards on government-controlled land. The Australian Capital Territory government has restricted promotion of junk food on its government-run bus service since 2015.6 The Queensland Government announced in 2018 that it would phase out junk food advertising in schools, sports grounds and public transport hubs, in a model that may be replicated in other Australian jurisdictions.7 States and territories can also support federal regulation to reduce children’s exposure to unhealthy food marketing.

There is a role for international human rights law in restricting the marketing of unhealthy food to children, including states’ obligations under the United Nations Convention on the Rights of the Child (CRC).8 While various human rights instruments could be used to achieve this goal, the CRC is the most ratified human rights instrument in the world and provides a legal framework for a child rights-based approach to prevention of obesity and non-communicable diseases.9 The CRC builds on the International Bill of Human Rights, acknowledging the unique sensitivities of children and their need for special protection.9 Australia ratified the CRC in December 1990, which means the government has a duty to ensure that all children in Australia enjoy the rights set out in the treaty.10

Advocates for a child rights-based approach to unhealthy food marketing say it provides a powerful and universally applicable way to consider children as rights holders in this area who are central to any policy discourse.9 Relevant rights include the right to health (Article 24), the right to food (Article 24 and Article 27), the right to life, survival and development (Article 6),9 and the right to protection from economic exploitation (Article 32)11 The right to privacy (Article 16) has also been identified as relevant given the proliferation of digital marketing techniques that collect large amounts of children’s personal information.11

Chile has implemented the world’s most comprehensive approach to obesity prevention to date.12 The country is facing a crisis of overweight and obesity, with three-quarters of adults overweight or obese, and rates of childhood obesity that are among the highest in the world.13 Until the late 1980s, malnutrition was widespread among poor Chileans, especially children.13 The rise in obesity has coincided with a period of industrialisation and urbanisation, resulting in a rapid dietary shift towards increased consumption of unhealthy foods and beverages, as well as a sedentary lifestyle.14

Faced with this crisis, Chilean authorities have acted on foods and beverages that exceed set thresholds for added sugars, sodium, saturated fats and calories, which are subject to:

Work is underway by the Global Food Research Program at the University of North Carolina at Chapel Hill to evaluate the effect of Chile’s suite of obesity prevention measures.12Read an account of Chile’s push to enact the new regime, and the response of citizens and industry.12 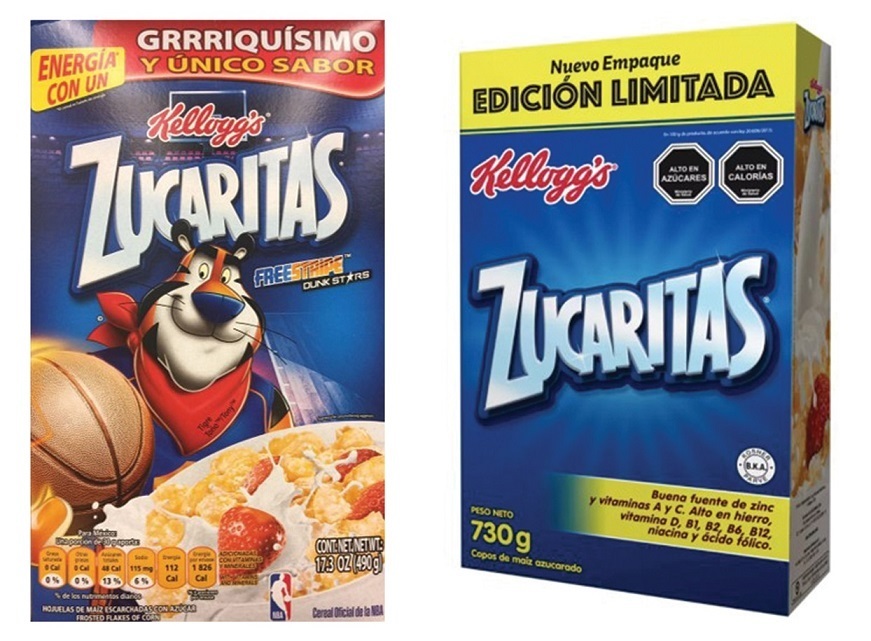 A brand of cereal in Chile (right) compared to Mexico