Unprompted, 20% of survey respondents could identify the purpose of the Health Star Rating System

History and development of the Health Star Rating System

The Australian Government’s 2011 Labelling Logic Review of Food Labelling Law and Policy identified the need for a front-of-pack food nutrition labelling scheme, within the framework of a comprehensive nutrition policy.1 The Australian and New Zealand Governments agreed to support this recommendation, declaring that a front-of-pack labelling system should provide simple, consistent nutrition information to enable consumers to make healthier food choices.2 The objective was for the system to be readily understandable across socio-economic and culturally and linguistically diverse groups, and for consumers with low literacy and numeracy.

The Australia and New Zealand Ministerial Forum on Food Regulation (the forum) developed the Health Star Rating System for use on packaged foods in conjunction with state and territory governments, industry, and public health and consumer groups. The Health Star Rating System was implemented by the food industry on a voluntary basis from June 2014, with a five-year review delivered in 2019.3 At the time of endorsing the new system in 2013, the forum said it could become mandatory if voluntary uptake was not “widespread and consistent”.4 By 2019, food ministers accepted consultants’ recommendation that the Health Star Rating System remain voluntary and committed to “high interim and final uptake targets”, with details to be finalised as part of an implementation plan.5

How does the Health Star Rating System work?

The Health Star Rating System is a front-of-pack food labelling system which rates the healthiness of packaged food and assigns it a rating from half a star to 5 stars, with a 5-star rated product the healthiest choice.6 The number of stars is determined using a calculator designed to assess positive and risk nutrients in food. The algorithm that drives the calculator was developed in consultation with Food Standards Australia New Zealand and other technical and nutrition experts, and varies by product category.

Health Star Ratings can appear on packaged food in two ways. The first shows just the star rating of the product; the second shows the star rating as well as the amount of various nutrients contained per 100g or 100mL or per pack or serve as specified. Content may be provided for the risk nutrients of energy (kilojoules), saturated fat, sodium (salt) and sugars, and the label may also include one positive nutrient such as protein, dietary fibre, certain vitamins or minerals.

The official Health Star Rating website states that the system is designed to help consumers to “quickly compare the general nutritional profile of foods within the same category of packaged and processed goods”.6 It allows consumers to compare similar foods that are typically displayed together (such as whole grain bread and white bread) but is not designed to compare foods across categories (such as yoghurt and frozen lasagna). Consumers are advised to read Health Star Ratings “together with other important nutrition information on this pack, like serving size and nutrients per serve”.7 Importantly, the website points out that Health Star Ratings are only available on participating packaged foods and: “fresh fruit and vegetables and lean meat are generally healthier choices than processed packaged food products”.6 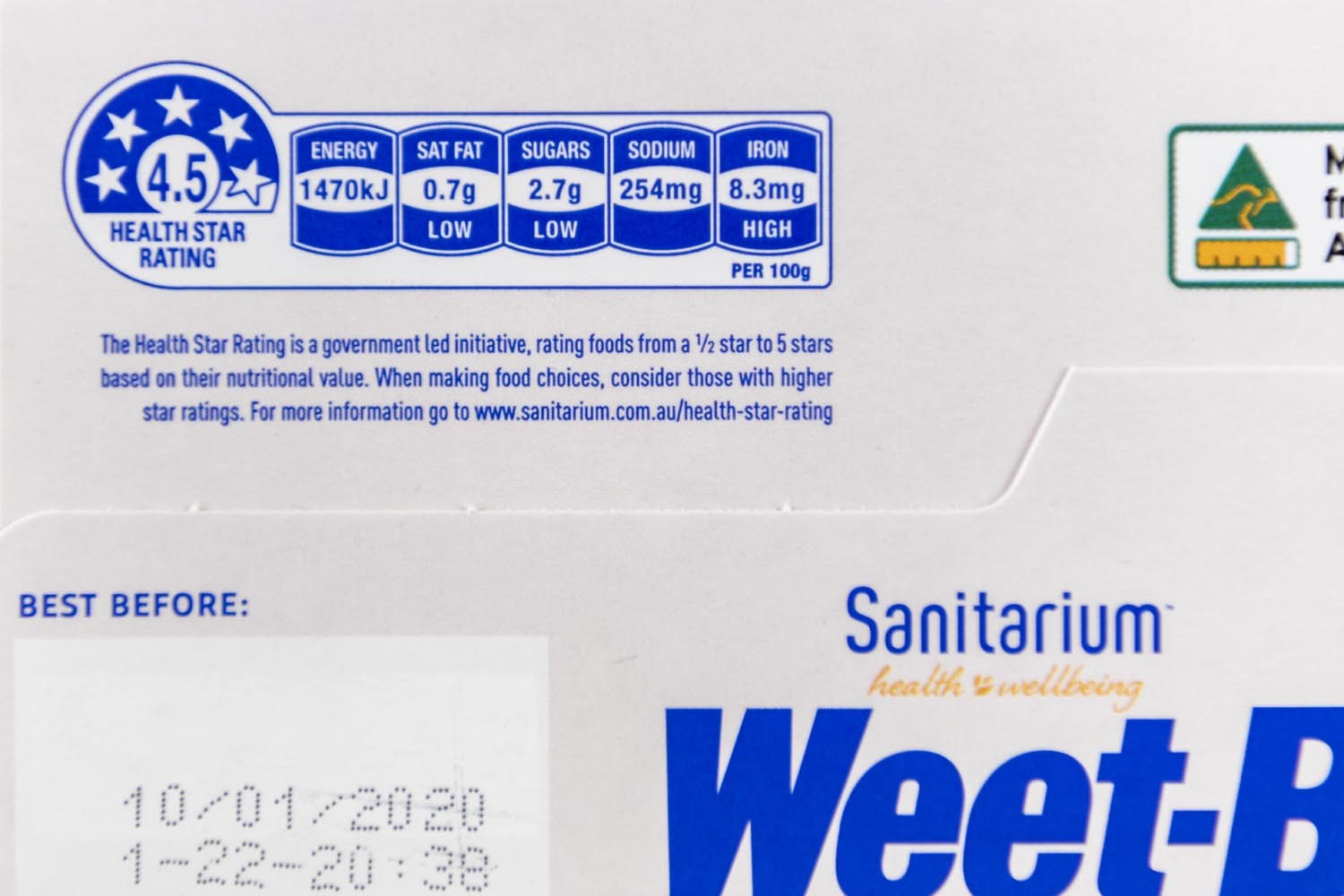 Monitoring and evaluation of the Health Star Rating System

a. Awareness, understanding and use

A national survey of Australian households has tracked consumer awareness, attitudes and interaction with the Health Star Rating System since September 2015.8 As at August 2018:

Respondents who recognised the Health Star Rating System logo when prompted (n=2053) were asked what they understood the logo to mean:

b. Uptake by industry

Besides influencing consumer choice, another way that food labelling can improve diets is by prompting food manufacturers to reformulate their products to reduce levels of unhealthy nutrients. A New Zealand study found that implementation of the Health Star Rating system in that country was leading food manufacturers to reformulate some products to make them healthier. The study found that most products displaying Health Star Ratings had been reformulated to some extent, with ratings being mostly displayed on products such as cereals, breakfast drinks, convenience foods and sauces and spreads.14A similar analysis for Australia found that the average energy density of food products carrying Health Star Ratings was lower than before the labelling system was introduced.15