The soft drink manufacturing industry in Australia is moderately concentrated

The soft drink manufacturing industry in Australia is moderately concentrated with its two largest players, Coca-Cola Amatil (40%) and Asashi Holdings (15%) accounting for more than half (55%) of revenue.1 Under industry classifications used by the Australian Bureau of Statistics,2 the industry includes the production of canned or bottled soft drinks and energy drinks (but excludes bottled water, fruit juice drinks and fruit drinks). Total revenue forecast across the industry in 2019–20 was $4 billion, with annualised five-year growth of -1.1% to reach $4.2 billion in 2024–25.

Asahi Holdings (Australia) is a private company that is a wholly-owned subsidiary of the Japan-based Asahi Group Holdings Limited.1 It has exclusive bottling rights to the Pepsi and Schweppes brands in Australia and operates under a similar business model to Coca-Cola Amatil. Its brands also include Sunkist, Solo, the Real Iced Tea Co and Cottee's.

According to analysts, the soft drink manufacturing industry has faced challenging operating conditions over the past five years due to changing consumer health trends driving demand away from sugary carbonated soft drinks.1 This has been offset somewhat, however, by growing popularity of higher value sports and energy drinks, and an increasing focus on diet and low- and no-sugar ranges. The market in Australia is regarded as in the mature phase of its economic life cycle and is forecast to grow at a rate below the overall economy over the next decade.

One of the major threats to the Australian soft drink industry is the prospect of a tax on sugary drinks. In the Australian Beverages Council’s 2016 annual report, President Sandra Loader celebrated the peak body’s success at warding off the "threat of a discriminatory tax on our products".3 The report noted that during the 2016 Federal Election, the Beverages Council devoted "significant resources to keeping a tax off the policy table of either the government or opposition, through direct engagement with key politicians". While support for a tax from the Greens was a risk going forward, Ms Loader said that "as an industry we should be very pleased with the outcomes to date in this space".

As part of an industry-wide campaign against a tax on sugary drinks, the Australian Beverages Council has used a policy substitution strategy by making a voluntary pledge to reduce sugar across the industry.45 Policy substitution is recognised as a key strategy used by industry to influence government policies and often involves voluntary initiatives used as alternatives to regulation. (A related strategy is to acknowledge the problem of obesity and position industry as an important part of the solution).6 Health Minister Greg Hunt endorsed the industry pledge and stood alongside Beverages Council chief executive Geoff Parker when it was announced at Parliament House in Canberra in June 2018.7

Health groups were sceptical about the Beverage Council’s May 2018 pledge to reduce sugar across the industry by an average of 20% by 2025, pointing out that individual products would not contain 20% less sugar and much of the reduction would flow from consumers switching to low-sugar alternatives.8 Baseline data for the pledge dated back to January 2016 and manufacturers’ participation in the scheme is voluntary.

At a company level, Coca-Cola Australia has placed advertisements in major newspapers highlighting a reduction of sugar in some of its products, under the headline 'We're listening'. In an interview with the Australian Financial Review, Coca-Cola Amatil chief executive Alison Watkins said of efforts to reduce sugar: "The whole industry recognises it’s an imperative. It’s what consumers want and it is what we must do if we don’t want to end up with more regulation."9 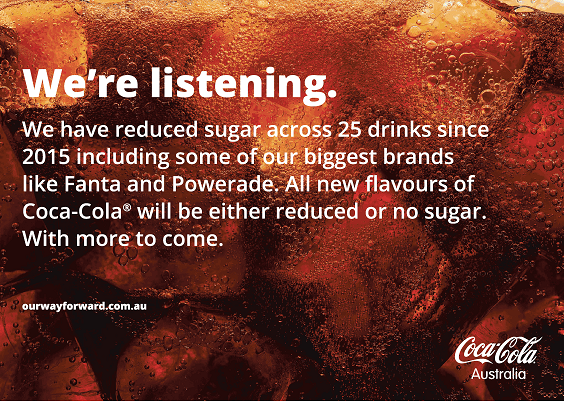 Globally, Coca-Cola has attracted criticism for funding research that shifts the blame for obesity away from diet towards inadequate physical activity. In 2015, the New York Times reported that Coca-Cola had provided $1.5 million to two US universities to establish the ‘Global Energy Balance Network’, a not-for-profit organisation led by influential scientists.10 The network’s objective was to 'reframe obesity' as a problem of energy imbalance that could be addressed with more physical activity rather than improving poor diets.11

In its proposal to establish the network, Coca-Cola said the science of energy balance could be deployed as a weapon 'in the growing war between the public health community and private industry' over obesity.11 The message is misleading as evidence shows that increased kilojoule intake is the driving force behind rising obesity rates.12 Professor Kelly Brownell said that as a business, Coke "focused on pushing a lot of calories in, but their philanthropy is focused on the calories out part, the exercise".10 Professor Marion Nestle said the Global Energy Balance Network was a front group for Coca-Cola. "Coca-Cola’s agenda here is very clear: Get these researchers to confuse the science and deflect attention from dietary intake," she said.10 A review of academic papers investigating the association between consumption of sugar-sweetened beverages and weight gain or obesity found those funded by the food industry were five times more likely to find there was no association, compared to papers without food industry funding.13

Coca-Cola provided funding in 2011 to establish an Australian arm of its program 'Exercise is Medicine',14 which the company described as "a global partnership dedicated to encouraging doctors and health care providers to prescribe exercise as medical treatment".15 The Coca-Cola Company founded the initiative in 2007 through a partnership with the American College of Sports Medicine. By January 2015, it was running in 43 countries and had trained more than 15,000 health professionals.16 Corporate material promoting the Exercise is Medicine program quotes physician Dr Robert Sallis, who was funded by Coca-Cola to develop the initiative: "You can't get five people in a room to agree on how to combat obesity,"he laughs. But the beauty of prescribing exercise is that "a profound public health problem can be fixed with a simple solution."15

In Australia, the Exercise is Medicine program was launched in 2011 as a partnership between Coca-Cola South Pacific and the professional body Exercise and Sports Science Australia.14 It was launched at the General Practitioner Conference and Exhibition in Sydney with a presentation by Dr Steven Blair, one of three US academics who established the Global Balance Energy Network.10 In a YouTube video promoting the network, Dr Blair claimed there was "virtually no compelling evidence" that fast food and sugary drinks cause obesity.17 While the local arm of the Exercise is Medicine program continues to be managed by Exercise and Sports Science Australia,18 funding from Coca-Cola South Pacific was to set up the program between 2010 and 2013 and has now ceased.14