The human body attempts to maintain energy balance and stable body weight through complex neurohormonal feedback systems that regulate energy intake and expenditure. Energy balance cannot be maintained, however, when there is a large surplus of energy over a prolonged period of time, and this will lead to weight gain.1

It is important to recognise that obesity is not simply caused by an imbalance of energy intake and expenditure. It is the result of an interaction between several factors including genetic, physiological, behavioural and social drivers, as well as environmental factors including widespread availability of highly processed unhealthy foods, increased portion size, and longer working hours.1 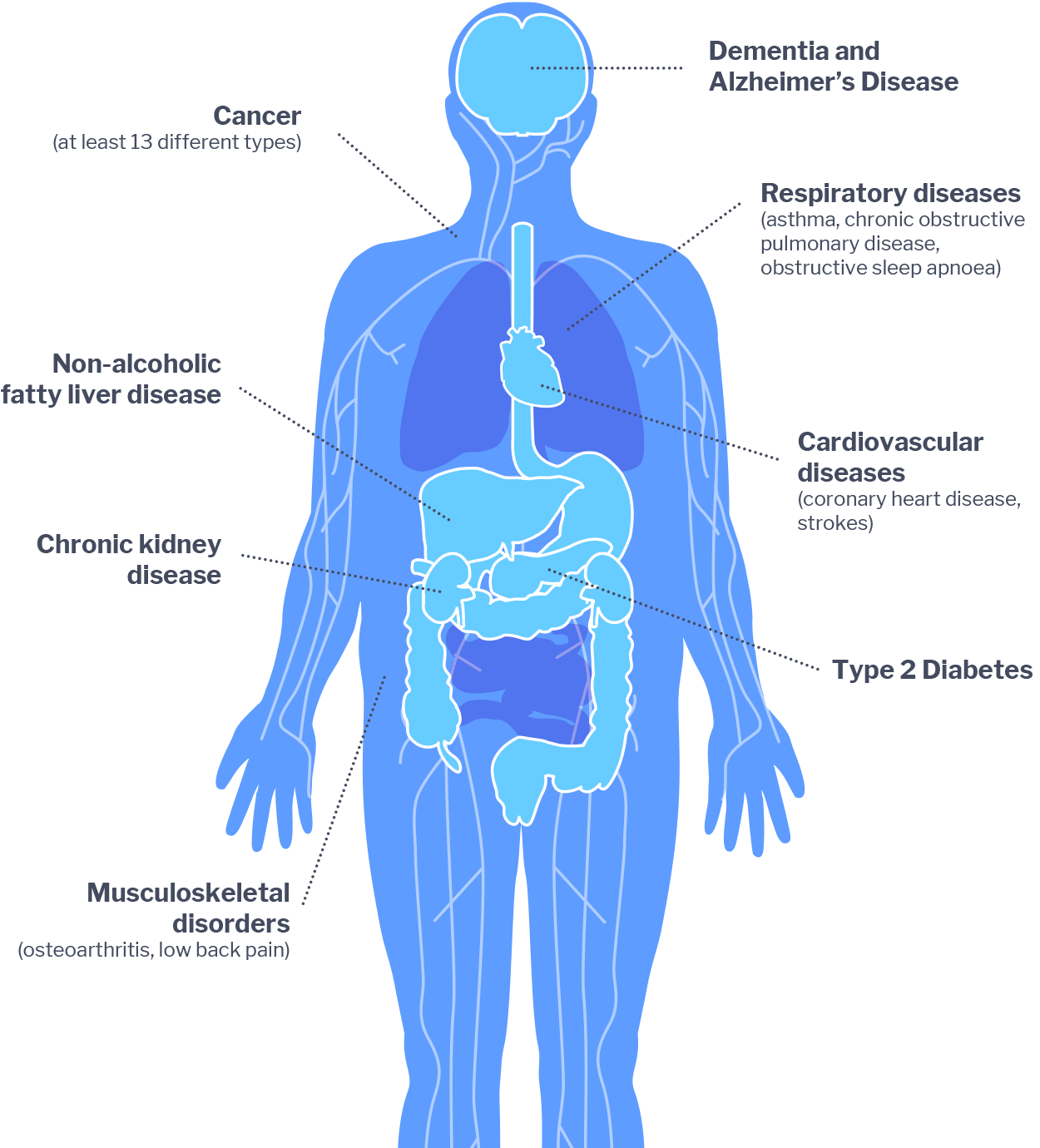 Obesity is associated with a state of low grade, chronic inflammation and an elevated risk for several diseases

Obesity is associated with a state of low grade, chronic inflammation and an elevated risk for several diseases.

It increases the risk of developing Type 2 diabetes, in which the body does not properly produce or use insulin, a hormone that regulates blood glucose levels and helps move glucose from the blood into the body’s cells for energy.2 Glucose therefore builds up in the blood, which can result in serious complications including damage to the kidneys and eyes, and heart disease and strokes. High blood glucose levels can also result in circulation problems (peripheral vascular disease) and nerve damage (peripheral neuropathy), which can cause foot ulcers and skin infections.

Excess weight is directly linked to various cardiovascular risk factors. As BMI increases, so does blood pressure, low-density lipoprotein (LDL or ‘bad’ cholesterol), triglycerides (a type of fat found in the blood that can contribute to hardening of the arteries) and blood glucose. This translates into increased risk for coronary heart disease, stroke and cardiovascular death.3

Musculoskeletal disorders including osteoarthritis and low back pain are associated with excess weight, due to inflammation and added strain on joints.34 Excess weight is associated with a higher risk of future disability in older age, with an Australian study finding a graded relationship between BMI and measures of disability including difficulties with bathing, dressing, eating, getting out of a chair or bed, using the toilet and walking about 200 metres.5

Excess weight has a direct impact on the development and progression of chronic kidney disease (CKD). The kidneys have to work harder to filter more blood than normal to meet the metabolic demands of increased body weight and this can damage the kidneys, heightening the risk of developing CKD in the long-term. Diabetes and high blood pressure, also linked to overweight and obesity, are major risk factors for CKD.6

Obesity is strongly linked with respiratory symptoms and diseases including asthma, chronic obstructive pulmonary disease (COPD) and obstructive sleep apnoea, due to its physical effects (for example, weight gain is associated with decreases in lung volumes) and systemic inflammation.7

Excess weight is associated with an increased risk of non-alcoholic fatty liver disease (NAFLD), which is when fat tissue builds up in the liver.8 In time, this accumulation of fat can cause inflammation and the formation of scar tissue, in a condition called non-alcoholic steatohepatitis (NASH). NASH can then lead to cirrhosis of the liver, a type of liver damage where healthy cells are replaced by scar tissue. In a state of cirrhosis, the liver is unable to perform its vital functions of metabolism, production of proteins including blood clotting factors, and filtering of drugs and toxins.

Excess weight can lead to cancer as a result of metabolic and hormonal changes and chronic inflammation that may cause the body to produce abnormal cells.9 The International Agency for Research on Cancer has linked overweight and obesity to at least 13 different types of cancer. These are:

Obesity is a risk factor for dementia and Alzheimer’s Disease,11 which may be due to inflammation, insulin resistance and cellular stress in areas of the brain thought to be involved in progression of the disease.12 Obesity is also linked to depression with the results of a major Australian diabetes, obesity and lifestyle study finding that depression was nearly twice as common among people with obesity compared to those who were not obese,13 however the direction of causality is not clear.